New to Ray? Sign up for this intro webinar on scaling machine learning workloads with Ray. Register now!

Ray is a fast, simple distributed execution framework that makes it easy to scale your applications and to leverage state of the art machine learning libraries. Using Ray, you can take Python code that runs sequentially and transform it into a distributed application with minimal code changes.

The goal of this tutorial is to explore the following:

Why should you parallelize and distribute with Ray?

As a previous post pointed out, parallel and distributed computing are a staple of modern applications. The problem is that taking existing Python code and trying to parallelize or distribute it can mean rewriting existing code, sometimes from scratch. Additionally modern applications have requirements that existing modules like multiprocessing lack. These requirements include:

How to get started with Ray

Ray can be installed through pip.

Let’s begin our Ray journey by creating a Ray task. This can be done by decorating a normal Python function with @ray.remote. This creates a task which can be scheduled across your laptop's CPU cores (or Ray cluster).

Consider the two functions below which generate Fibonacci sequences (integer sequence characterized by the fact that every number after the first two is the sum of the two preceding ones). The first is a normal python function and the second is a Ray task.

There are a couple of things to note regarding these two functions. First, they are identical except for the @ray.remote decorator on the fibonacci_distributed function.

The second thing to note is the small return value. They are not returning the Fibonacci sequences themselves, but the sequence size, which is an integer.  This is important, because it might lessen the value of a distributed function by designing it so that it requires or returns a lot of data (parameters). Engineers often refer to this as the input/output (IO) of a distributed function.

The functions in this section will allow us to compare how long it takes to generate multiple long Fibonacci sequences both locally and in parallel. It is important to note that both functions below utilize os.cpu_count() which returns the number of CPUs in the system.

The machine used in this tutorial has eight CPUs which means that each function below will generate 8 Fibonacci sequences.

Before getting into how the code for run_local and run_remote work, let's run both of these functions to see how long it takes to generate multiple 100000 number Fibonacci sequences both locally and remotely.

The run_remote function parallelized the computation across multiple cpus which resulted in a smaller processing time (1.76s vs 4.20s).

In order to better understand why run_remote was faster, let's briefly go over the code and along the way explain how the Ray API works.

The ray.init() command starts all of the relevant Ray processes. By default, Ray creates one worker process per CPU core. If you would want to run Ray on a cluster, you would need to pass in a cluster address with something like ray.init(address= 'InsertAddressHere').

Calling fibonacci_distributed.remote(sequence_size) immediately returns a future and not the return value of the function. The actual function execution will take place in the background. Since it returns immediately, each function call can be executed in parallel. This makes generating those multiple 100000 long fibonacci sequences take less time.

ray.get retrieves the resulting value from the task when it completes.

Finally, it is important to note that when the process calling ray.init() terminates, the Ray runtime will also terminate. Note that if you try and run ray.init() more than once you may get a RuntimeError (Maybe you called ray.init twice by accident?). This can be solved by using ray.shutdown()

Among other things, the dashboard lets you:

The dashboard below shows the resource utilization on a per-node and per-worker basis after running run_remote(200000). Notice how the dashboard shows the function fibonacci_distributed that’s running in each worker. It’s a good idea to observe your distributed functions while they are running. That way, if you see one worker doing all the work, then you may be using the ray.get function incorrectly. Also, if you see your total CPU utilization getting close to 100 percent, you may be doing too much. 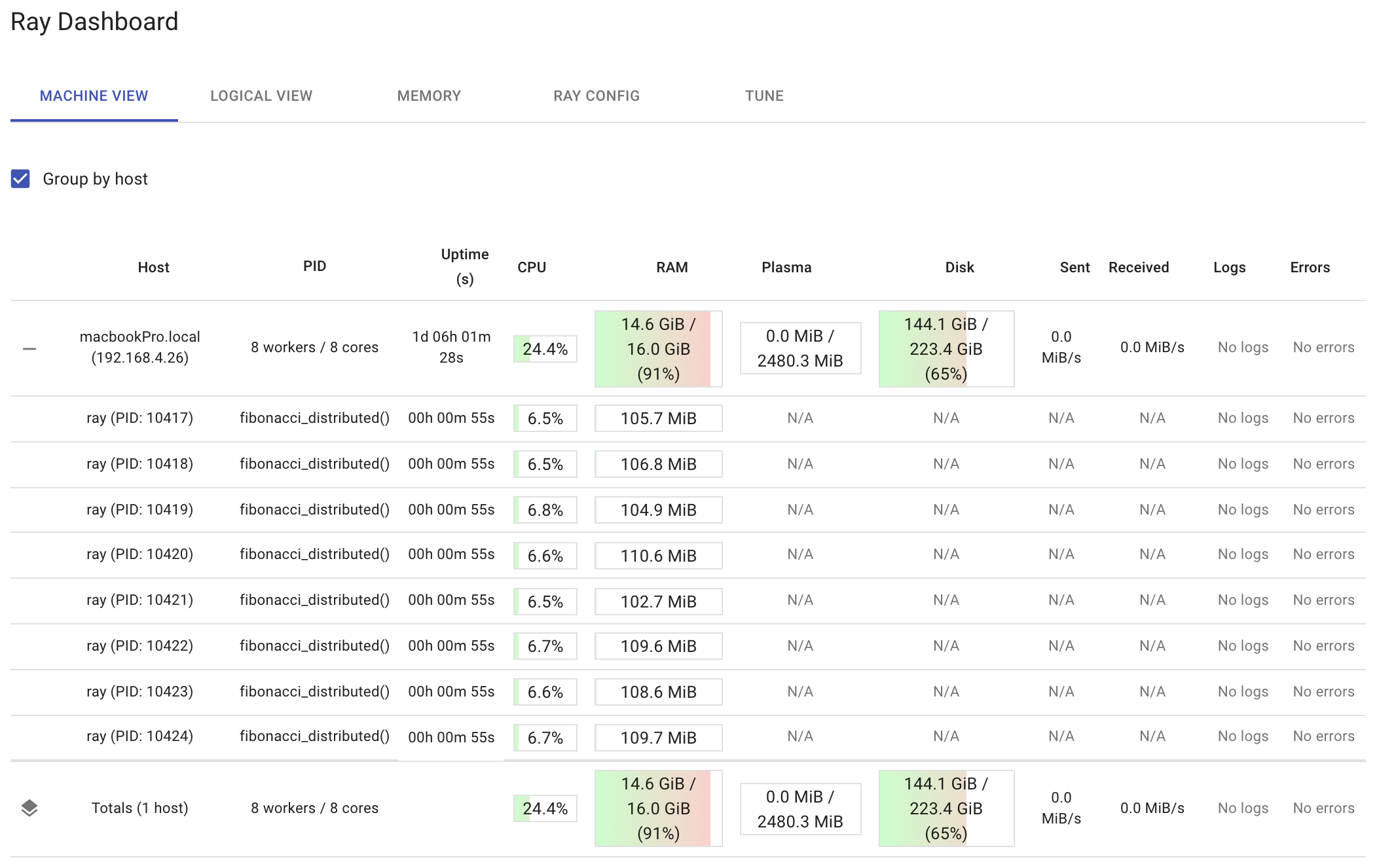 IO is also essential when distributing functions. If you modified these functions to return the sequences they calculate, the IO would increase as the sequence size increased. At some point, the time needed to transmit the data would dominate the total time required to complete the multiple calls to the distributed function. This is important if you are distributing your functions over a cluster. This would require the use of a network, and network calls are more costly than the interprocess communication used in this tutorial.

Therefore, it is recommended that you try to experiment with both the distributed Fibonacci function and the local Fibonacci function. Try to determine the minimum sequence size needed to benefit from a remote function. Once you figure out the computing, play with the IO to see what happens to overall performance. Distributed architectures, regardless of the tool you use, work best when they don’t have to move a lot of data around.

Fortunately, a major benefit of Ray is the ability to maintain entire objects remotely. This helps mitigate the IO problem. Let’s look at that next.

Just as Ray translates Python functions to the distributed setting as tasks, Ray translates Python classes to the distributed setting as actors. Ray provides actors to allow you to parallelize an instance of a class. Code wise, all you need to add to a Python class is the @ray.remote decorator to make it an actor. When you make an instance of that class, Ray creates a new actor which is a process that runs in the cluster and holds a copy of the object.

Since they are remote objects, they can hold data, and their methods can manipulate that data. This helps cut down on interprocess communication. Consider using an actor if you find yourself writing too many tasks that return data, which in turn are sent to other tasks.

Let’s now look at the actor below.

The code above can be used to load and manipulate data from a public dataset known as the Global Surface Summary of the Day (GSOD). The dataset is managed by the National Oceanic and Atmospheric Administration (NOAA) and it is freely available on their site. NOAA currently maintains data from over 9,000 stations worldwide and the GSOD dataset contains daily summary information from these stations. There is one gzip file for each year from 1929 to 2020. For this tutorial, you only need to download the files for 1980 and 2020.

The goal of this actor experiment is to compute how many readings from 1980 and 2020 were 100 degrees or greater and determine if 2020 had more extreme temperatures than 1980. In order to implement a fair comparison, only stations that existed in both 1980 and 2020 should be considered. So, the logic of this experiment looks like this:

The problem is that this logic is completely sequential; one thing only happens after another. With Ray, a lot of this logic can be done in parallel.

The table below shows a more parallelizable logic.

Writing out the logic in this fashion is an excellent way of making sure you are executing everything that you can in a parallelizable way. The code below implements this logic.

There are a couple important things to mention about the code above. First, putting the @ray.remote decorator at the class level enabled all class methods to be called remotely. Second, the code above utilizes two actor processes (gsod_y1 and gsod_y2) which can execute methods in parallel (though each actor can only execute one method at a time). This is what enabled the loading and processing of the 1980 and 2020 data at the same time.

Ray is a fast, simple distributed execution framework that makes it easy to scale your applications and to leverage state of the art machine learning libraries.  This tutorial showed how using Ray makes it easy to take your existing Python code that runs sequentially and transform it into a distributed application with minimal code changes. While the experiments here were all performed on the same machine, Ray also makes it easy to scale your Python code on every major cloud provider. If you’re interested in learning more about Ray, check out the Ray project on GitHub, follow @raydistributed on twitter, and sign up for the Ray newsletter.