The Future of Computing is Distributed

Moore’s Law, which has fueled the unprecedented growth of the computer industry over the past 40 years, has ended. Under Moore’s Law, processor performance famously doubled every 18 months. Today, however, it grows at a paltry 10-20% over the same period.

While Moore’s Law may have ended, the demand for increased compute has not. To address this challenge, computer architects have focused their attention on building domain-specific processors that trade generality for performance.

Domain-specific hardware is not enough

As the heading suggests, domain-specific processors are optimized for specific workloads at the cost of generality. The canonical example of such a workload is deep learning, which is revolutionizing virtually every application domain, including financial services, industrial control, medical diagnosis, manufacturing, system optimization, and more.

To support deep learning workloads, companies have raced to build specialized processors, such as Nvidia’s GPUs and Google’s TPUs. However, while accelerators like GPUs and TPUs bring more computational power to the table, they essentially help to prolong Moore’s Law further into the future, not to fundamentally increase the rate of improvement.

The demands of machine learning applications are increasing at a breakneck speed. Here are examples of three important workloads.

According to a famous OpenAI blog post, the amount of computation required to achieve state-of-the-art machine learning results has roughly doubled every 3.4 months since 2012. This is equivalent to an increase of almost 40x every 18 months, which is 20x more than Moore’s Law! Thus, even if Moore’s Law hadn’t ended, it would still fall way short of satisfying the demands of these applications.

This explosive growth is not exclusive to esoteric machine learning applications, such as AlphaGo. Similar trends hold for mainstream application areas like computer vision and natural language processing. For example, consider two state-of-the-art neural machine translation (NMT) models, the seq2seq model from 2014 and a pretraining approach on tens of billions of sentence pairs from 2019. The ratio between the computational resources required by the two is over 5,000x (seq2seq takes approximately 0.09 PetaFLOPS-days as reported here, while per our estimates the latter approach takes 460 PetaFLOPS-days). This corresponds to an annual increase of 5.5x. Similarly, consider ResNet 50 versus the ResNeXt 101 Instagram model, two state-of-the-art object recognition models which were published in 2015 and 2018, respectively. The ratio between the training times of the two is a staggering 11,000x (58min using 16 NVIDIA V100 GPUs for ResNet 50 vs 22 days using 336 GPUs for ResNetXt 101). This corresponds to an annual increase of 22x! These values dwarf Moore’s law, which suggests an increase of just 1.6x every year. 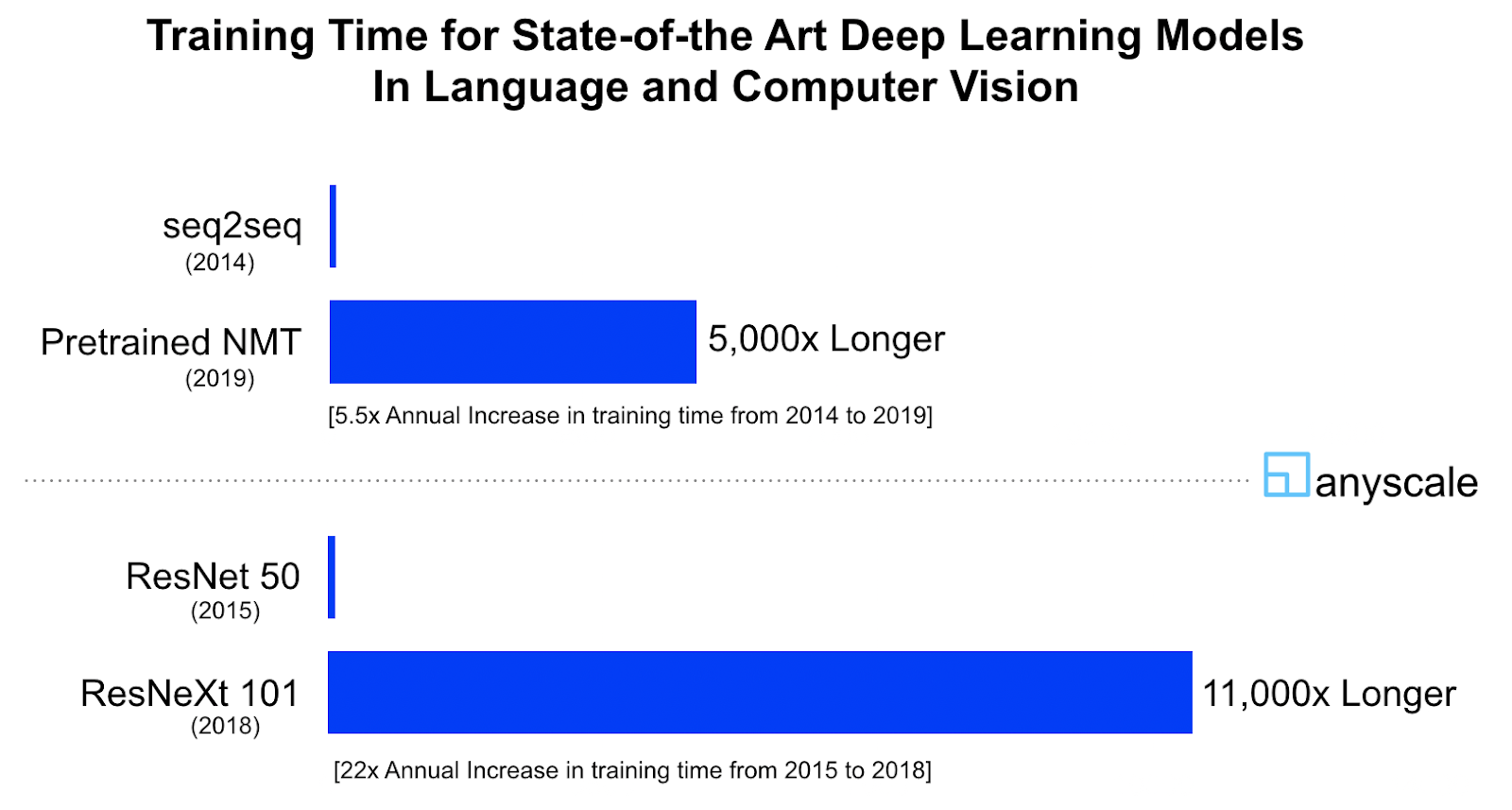 The growing gap between these demands and the capabilities of even specialized processors leaves system architects no choice but to distribute these computations. Recently, Google unveiled TPU v2 and v3 Pods that consist of up to 1,000 TPUs connected by a high-speed meshed network. Interestingly, while TPU v3 pods are 8x more powerful than TPU v2 pods, only 2x of this improvement is due to faster processors. The rest is due to TPU v3 pods becoming more distributed, i.e., employing 4x more processors than TPU v2 pods. Similarly, Nvidia has released two distributed AI systems, DGX-1 and DGX-2 with 8 and 16 GPUs, respectively. Furthermore, Nvidia recently acquired Mellanox Technologies, a premier network vendor, to bolster the connectivity between its GPUs in a datacenter.

It gets worse. You don’t train a model just once. Typically, the quality of a model depends on a variety of hyperparameters, such as the number of layers, the number of hidden units, and the batch size. Finding the best model often requires searching among various hyperparameter settings. This process is called hyperparameter tuning, and it can be very expensive. For example, RoBERTa, a robust technique to pretrain NLP models, uses no fewer than 17 hyperparameters. Assuming a minimal two values per hyperparameter, the search space consists of over 130K configurations, and exploring these spaces, even partially, can require vast computational resources.

Another example of a hyperparameter tuning task is neural architecture search which automates the design of artificial neural networks by trying different architectures and picking the best performing one. Researchers are reporting that designing even a simple neural network can take hundreds of thousands of GPU computing days.

While deep neural network models can typically leverage the advances in specialized hardware, not all ML algorithms can. In particular, reinforcement learning algorithms involve a large number of simulations. Due to their complex logic, these simulations are still best executed on general-purpose CPUs (they leverage GPUs only for rendering), so they do not benefit from the recent advances in hardware accelerators. For instance, in a recent blog post, OpenAI reported using 128,000 CPU cores and just 256 GPUs (i.e., 500x more CPUs than GPUs) to train a model that can defeat amateurs at Dota 2.

While Dota 2 is just a game, we are seeing an increase in the use of simulations in decision making applications, with several startups, such as Pathmind, Prowler, and Hash.ai emerging in this area. As simulators try to model the environment ever more accurately, their complexity increases. This adds another multiplicative factor to the computational complexity of reinforcement learning.

Big data and AI are fast transforming our world as we know it. While with any technology revolution there are dangers along the way, we see tremendous potential for this revolution to improve our lives in ways we scarcely could have imagined 10 years ago. However, to realize this promise we need to overcome the huge challenges posed by the rapidly growing gap between the demands of these applications and our hardware capabilities. To bridge this gap, we see no alternative but to distribute these applications. This calls for new software tools, frameworks, and curricula to train and empower developers to build such applications. This opens a new exciting era in computing.

At Anyscale, we are developing new tools and distributed systems such as Ray to usher application developers into this new era. 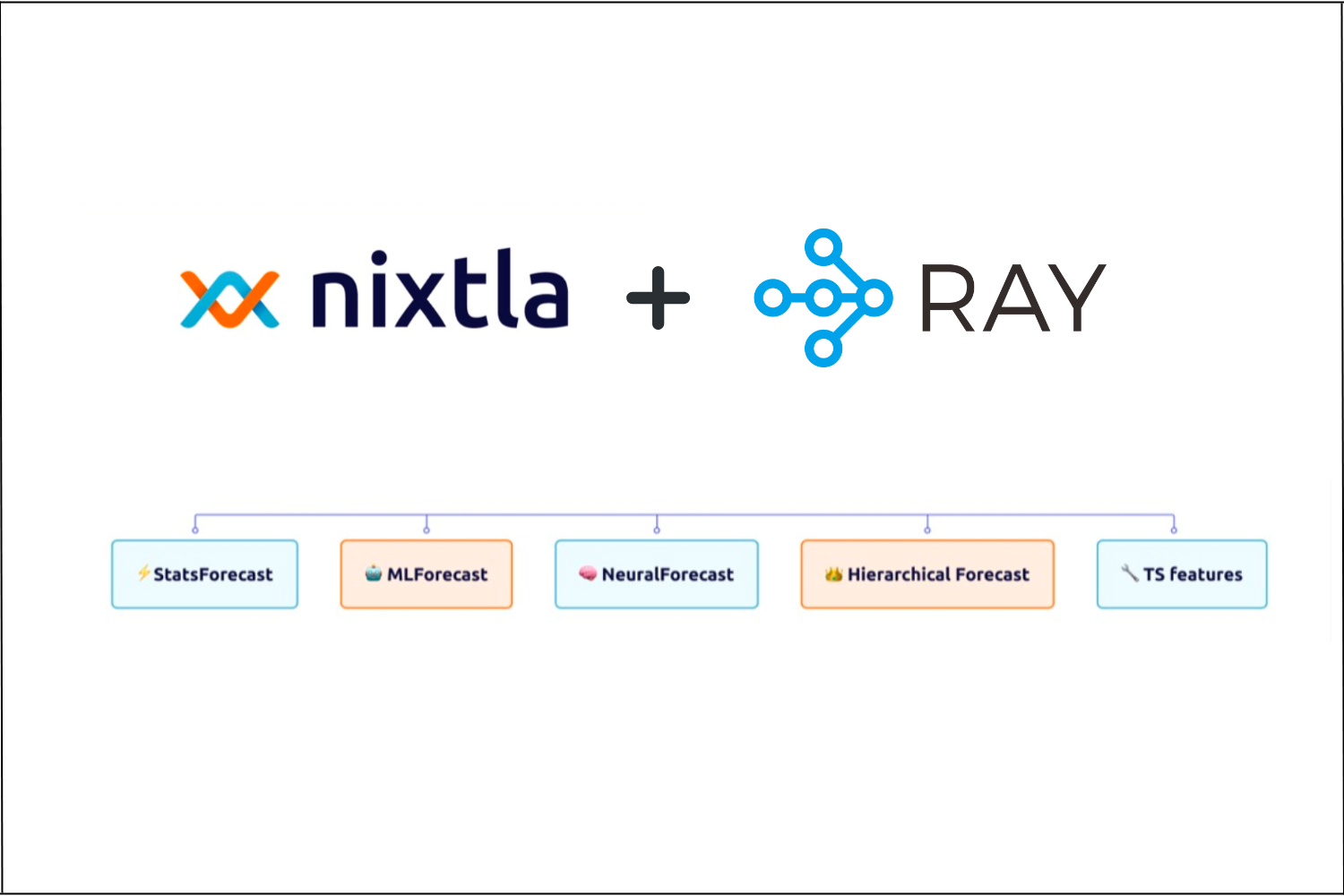 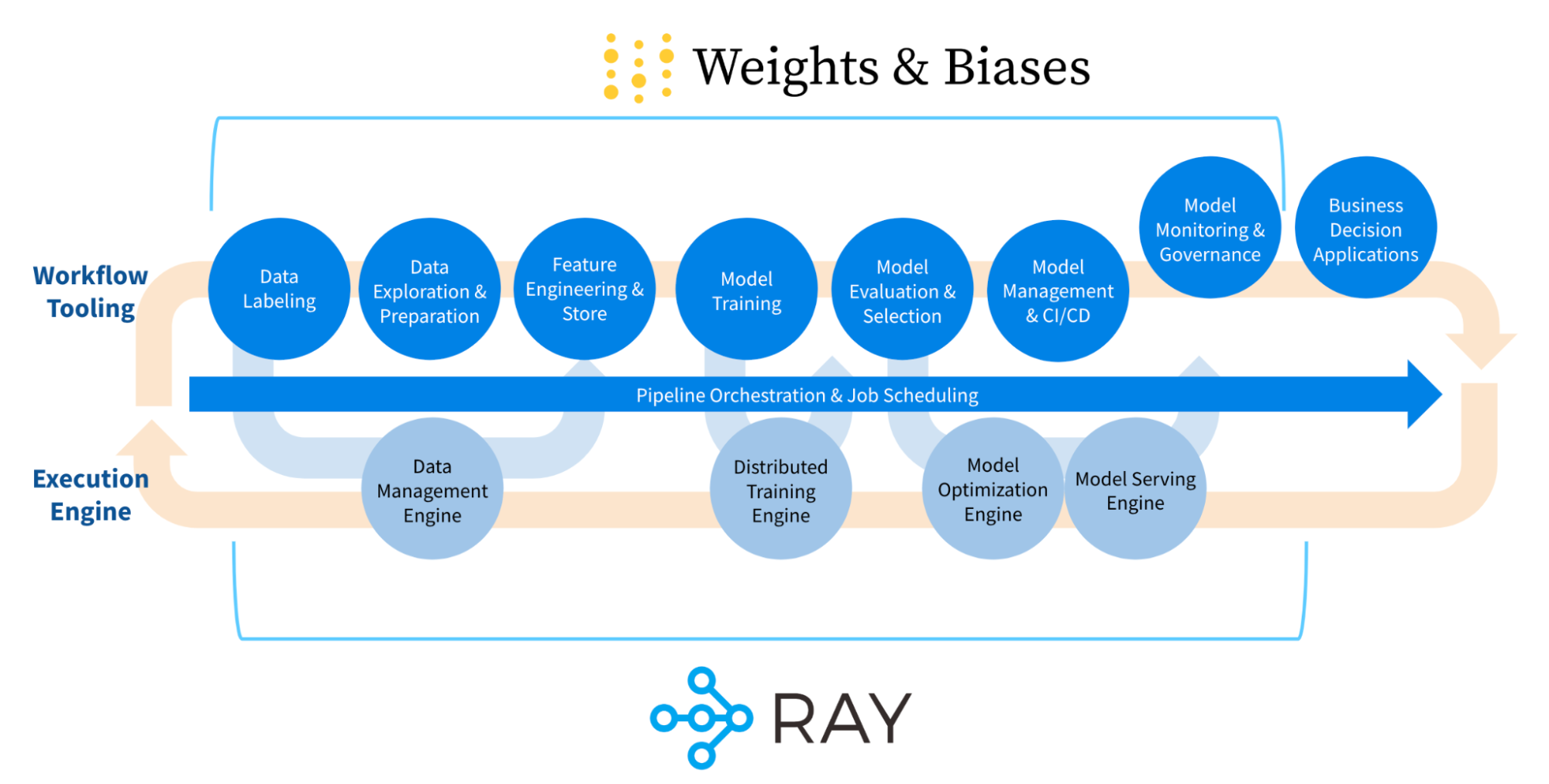 Simplify your ML Development Cycle with Anyscale and Weights & Biases 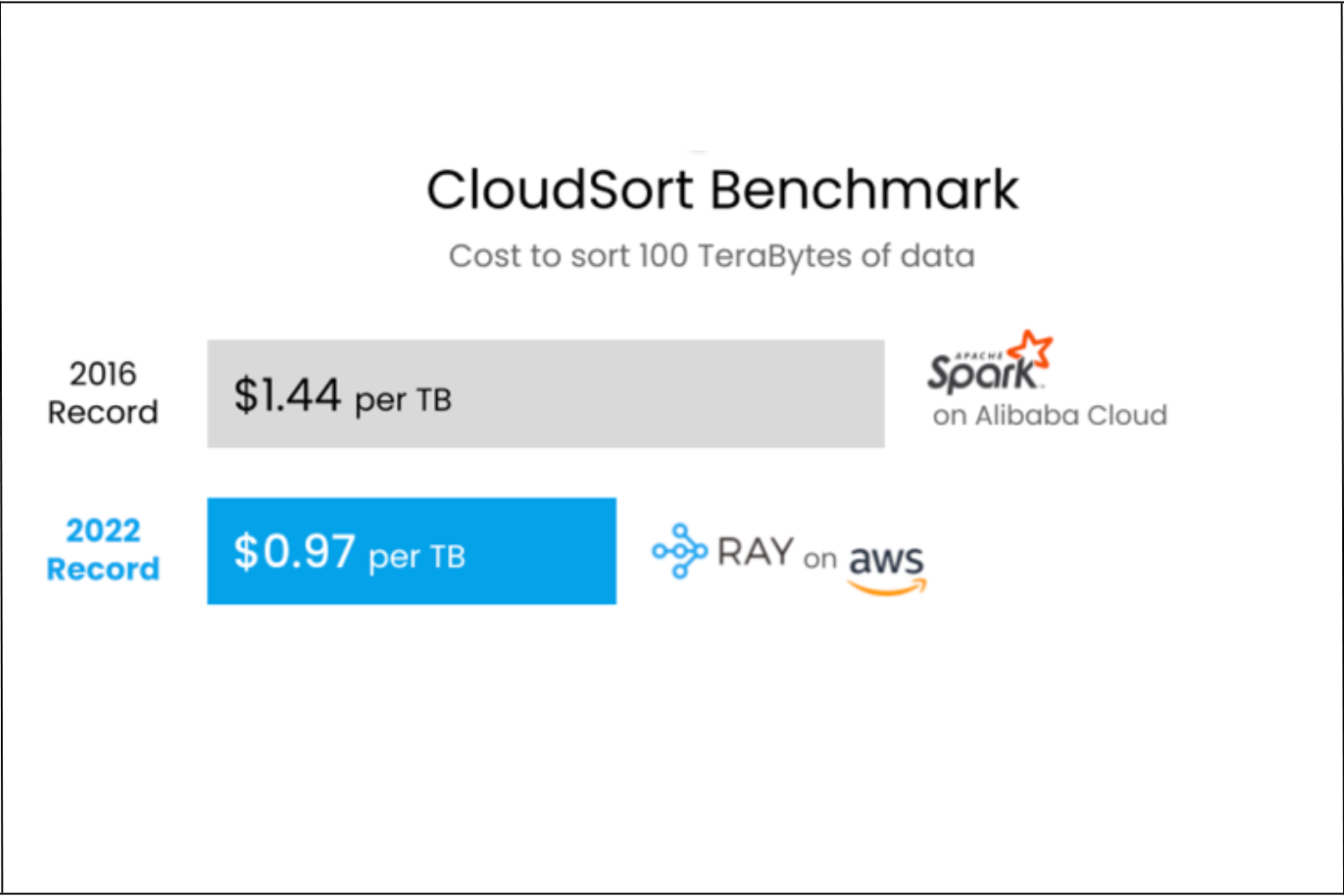