This is part 3 of our series on third generation ML architectures. In the previous post, we talked about how distributed libraries allow improved performance by exploiting the full bandwidth of distributed memory, and giving greater programmability. But how does that actually work? What does the code look like?

In this post, we’ll be looking at a concrete example with code samples: ML ingest with Ray Datasets and Ray Train.

Runnable scripts are available that can be adapted for use on your own Ray cluster.

To set the stage, let's consider ML training in the small-data setting. These kinds of pipelines are quite simple since all data fits in memory, and the overhead of shuffling is minimal. You can express it as just a few lines of pseudocode:

Let's review the steps above:

In other words, our simple pipeline became hard since components necessarily become distributed and pipelined for performance:

Let's briefly consider how we could compose existing distributed systems to solve this distributed ingest problem. We need to set up a Spark cluster for data processing, a Horovod cluster for training, a coordinator service for control plane operations, and external storage for data plane communication.

The training pipeline would work in the following steps. First, the coordinator service would (1) submit a shuffle job to the Spark cluster, which (2) reads and writes data out to external storage. Next, the Horovod data reader (e.g., Petastorm) would (3) fetch the written dataset location from the coordinator and (4) read the shuffle data for training. These steps would repeat for each epoch of training, and can run concurrently to optimize execution latencies.

The disadvantages of the 2nd generation approach are:

In contrast, with a 3rd gen architecture we can compose the entire data ingest pipeline using distributed libraries. In the snippet below (see here for a full runnable example), we compose a Ray Dataset Pipeline with a distributed Ray Train Job:

The above snippet, while simplified, is able to express the aforementioned ML ingest and training pipeline with just a few lines of Python code--- without any need to wrangle distributed systems. Under the hood, the Dataset and Train libraries leverage Ray Tasks and Actors respectively to execute distributed data preprocessing and ML training. We are able to compose them by just passing a reference to the dataset_pipeline object to Train: 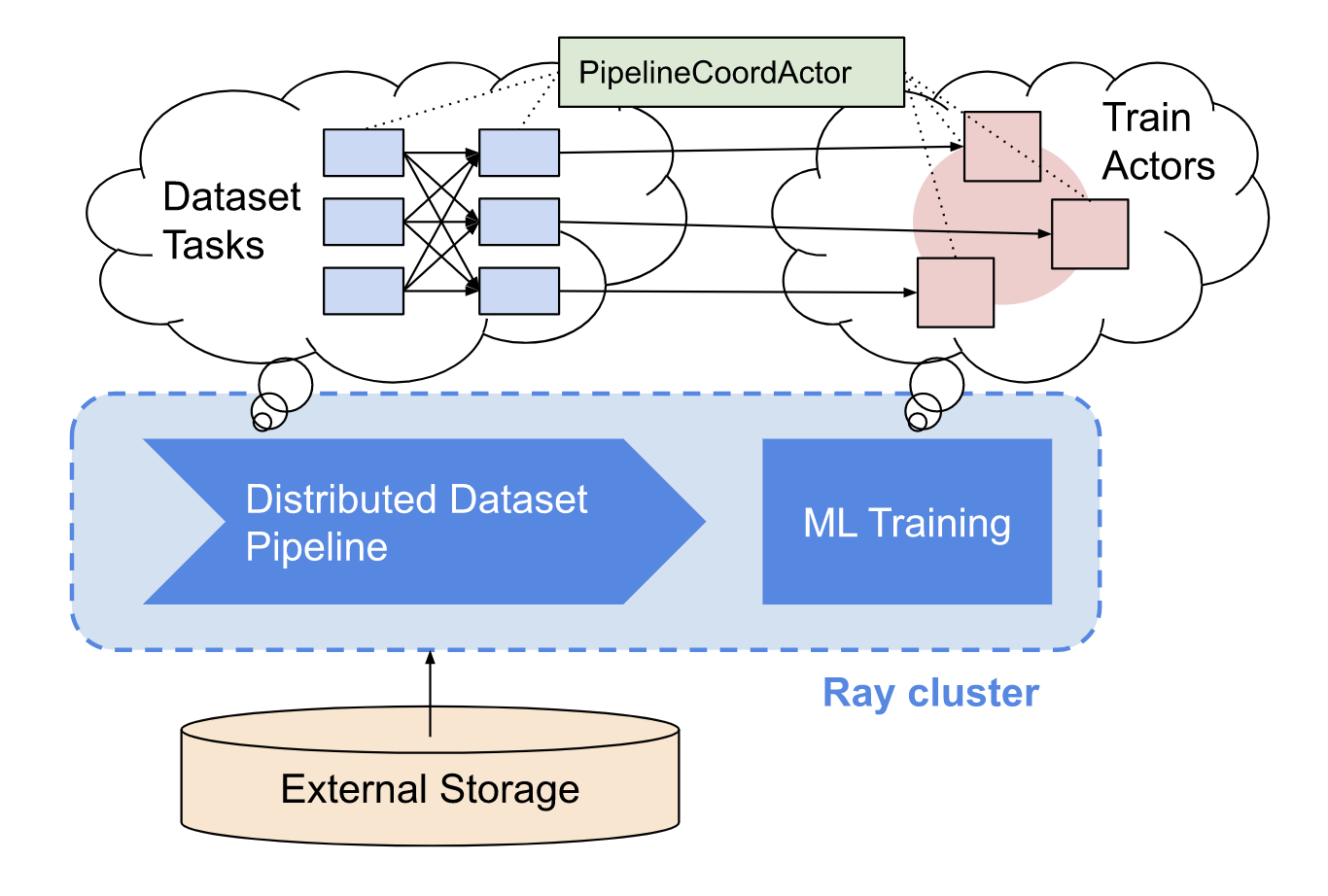 The above figure illustrates the tasks and actors created by the above code snippet.

So how does it work? Let's walk through the above example starting with the system requirements.

Requirements for the Example

Let's look at the first part of the code above, which creates a data loading pipeline.

This uses the Ray Dataset library to create a DatasetPipeline reading our parquet data from disk. Since the dataset (2TB) is larger than our cluster memory (1TB), we use the .window() function to process windows of size=200GB at a time, leaving extra memory headroom for execution. Since we want to loop over the dataset indefinitely, we use the .repeat() operator after that.

The second part of the pipeline is applying the distributed transform and shuffling operations.

This is telling Ray to transform records in the pipeline with a given preprocess function, and then shuffling the entire window randomly (e.g., 200GB at a time), to avoid going out of core. So far, nothing has been executed beyond reading the file metadata--- we're building up a logical pipeline.

Next we define the code that is run on each GPU worker and implements distributed training. Each worker can read a particular split of the pipeline we defined by calling get_dataset_shard. It sets up a model using train.torch.prepare_model to participate in distributed training. Then, it trains over the data in each epoch (repeat) of the dataset.

To create the training actors, we create a ray.train.Trainer that requires 3 GPU workers:

At this point, our pipeline is fully defined, and our training actors have been created and assigned GPUs in the cluster, we just need to run it.

This line of code triggers the execution of the entire pipeline:

So what's happening in the cluster?

You can visualize the overall dataflow in the following timeline diagram. Once data is loaded, shuffle and execution proceed in a fully pipelined way, leveraging tasks running on CPU nodes to implement shuffling, and actors running on GPUs for training:

Try it out yourself with these examples in Ray 1.8:

In a previous blog post, we discussed the performance advantages of passing data in-memory and with pipelining and showed improvements in an ablation study. Since then, Datasets has been used by several open source users to implement large-scale shuffled ML ingest. We present two case studies from our PyData Dataset talk showing significant performance improvements: 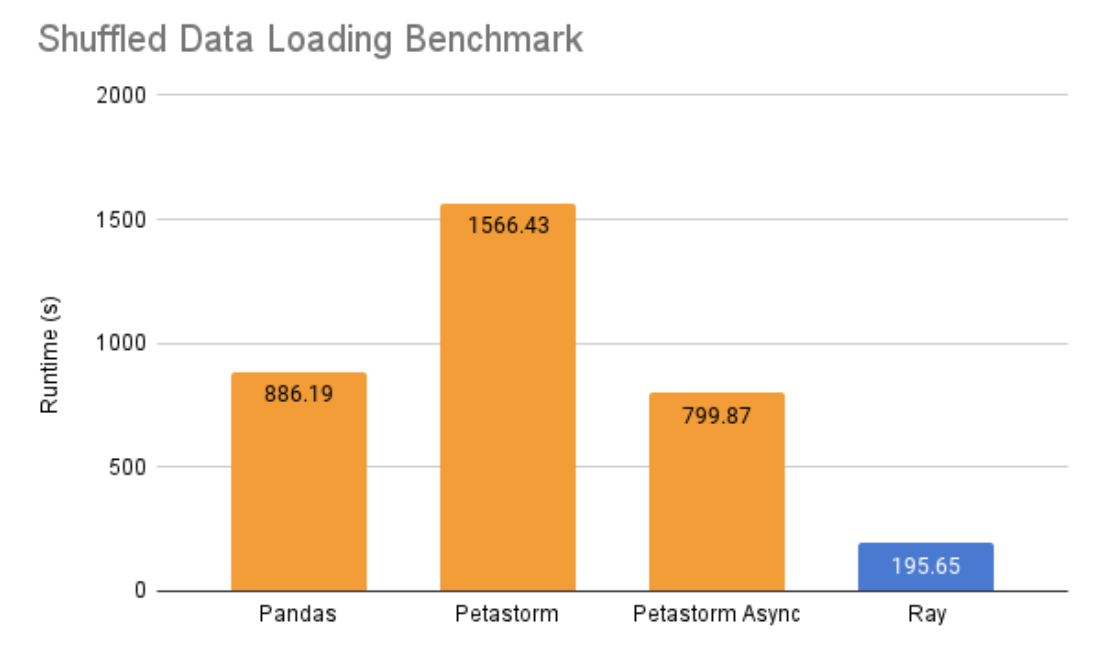 We believe 3rd gen ML architectures will help engineers develop and standardize infrastructure for large-scale ML apps. This blog demonstrated that with just a single Python script, we can connect distributed data preprocessing with training in a highly performant way.

Moreover, in true 3rd-gen fashion, we were able to do the above without building a specialized system. We used Ray to interleave execution of two independent distributed libraries--- a key capability not possible in 2nd gen architectures. This composability is possible since both libraries are built on the common and interoperable primitives of Ray tasks, actors, and objects.

While we're just getting started with ML ingest-- look for new examples and performance enhancements as Ray Datasets graduates from beta in the next few months--- this is just one aspect of programmable distributed compute with Ray. Check out other use cases in Tuning, Training, Serving, and more here: https://www.ray.io/